Henry Cavill was in a Hellraiser movie, y’all.

Hellworld is the third film in the franchise from Director Rob Bota. A group of friends are invited to a party centered around a popular online game called Hellworld shortly after the suicide of a friend.  The party turns out to be trap for the group as they are killed one by one by Pinhead is remarkably un-Pinhead like ways.

Lance Henrickson is here to make things seem a bit classier when Bradley is away…but while this is the first film since Bloodlines to have actually been written for the franchise? It is the one that seems the most ignorant of the history of the franchise. When did this game pop up? Are the Cenobites now  urban legends of a sort? Why is Pinhead killing people with a meat cleaver? We get a convoluted twist that implies it was all a drug induced torture…and yet, the film then shows Pinhead is real and…this film is just terrible. Even Bradley cannot save it, because the script has Pinhead so drastically out of character.

It does not help that each of the three films by the same director do not feel remotely connected. The dialog for Pinhead does not feel right, the motives make no sense, even with a franchise where such things are all over the place. 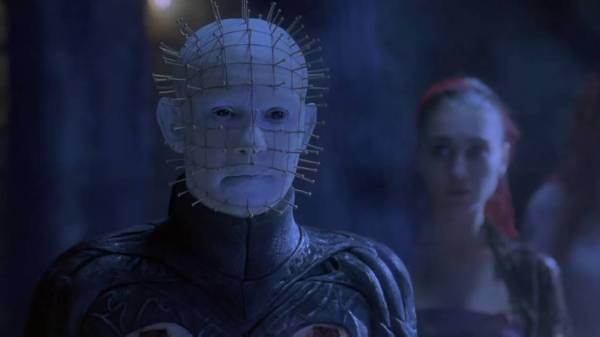 Amy is a hardened reporter who is provided with a shocking video tape of a cult in Romania in which young teens are committing suicide and then being brought back to life by their mysterious leader. She heads off to Bucharest to find the truth of the story.

Much like the prior two films, Deader was not part of the Hellraiser films originally. Once decided, they added a quick back story that tied the cult leader to the toymaker mythos established back in the fourth film.

Hellraiser: Deader is incredibly disjointed, with all of the Pinhead stuff feeling forced into the story.Bradley gets a few snappy moments towards the end, but largely, his presence feels very much like an afterthought.

I guess I would not declare the film as being outright terrible…but it is not all that interesting to watch either. And it certainly adds little to the franchise.