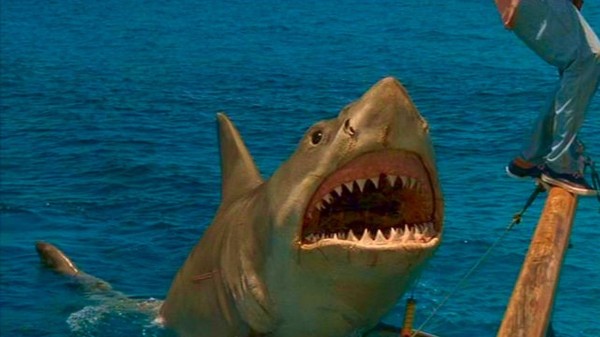 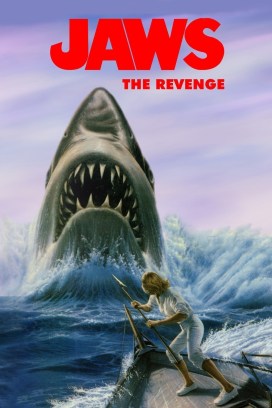 Apparently, the one thing that could kill the shark was this film.  Opening up shortly before Christmas, we find Sean Brody is now working for the Amity police.  He lives with his mother (a returning Lorraine Gary).  He is called out to take care of a log floating in the bay.  As he tries to get the log, a large great white shark attacks Sean.

Mike comes home to be with his grieving mother and invite her to return with him to his Bahaman home where he is studying snails.  She gives in, though starts expressing a belief that the shark has returned to take out the family.  And sure enough, once in the Bahamas, the shark appears.

Most of the film is spent with Michael and local pilot Hoagie trying to convince Ellen that it is all coincidence, but she knows better.  In the meantime, Mike and his research partner Jake are secretly studying the giant great white.

While the idea that Ellen would be obsessed with the notion that the shark is seeking revenge on her family is intriguing…it is undermined by the fact that she is right.  The shark is calculated, ignoring people who are not related to the Brody family (one death is because the shark misses a Brody) and showing itself a skilled hunter, navigating its way through a sunken ship. The dialog also seems to ignore that Chief Brody killed the previous to sharks, with Ellen and Mike talking as if this new shark is the same shark from earlier films.

The film gets even more improbable.  It pretty much eats a plane (of course the shark downed a  helicopter in the second film).  The shark pops out of the water and roars.  Like a dinosaur.

Jaws: the Revenge completely ignores Jaws 3-D, and tries very hard to ties itself to the first film.  There are several duo-toned clips from the original, meant to draw parallels.  Except, they are presented in a way that implies they are memories of Ellen’s. But she is recalling things she never witnessed.  Martin killing the shark, Sean being killed by the shark…and so on and so on.

Really, all those call backs just bring more attention to how anemic this film is.  Even Michael Caine couldn’t save it. 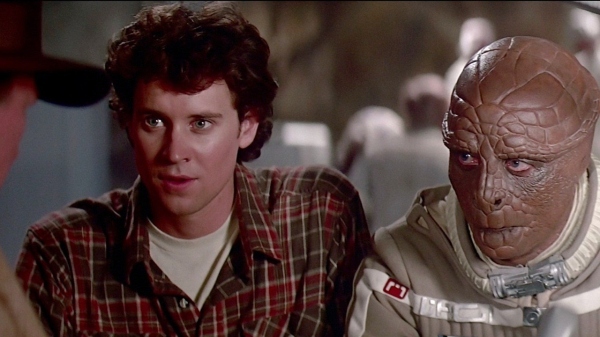 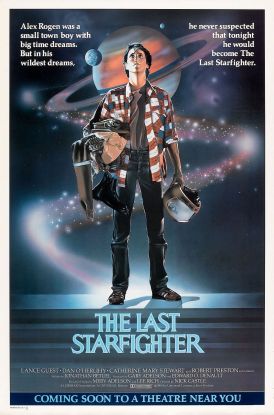 Alex Rogan is stuck in a dead end life.  He, his mom and little brother live in a run down trailer park.  He wants to take his girl friend Maggie and get out…but the options seem to be dwindling.  His main outlet for his frustrations is a video game called Starfighter.

This leads to the most excitement the park has seen when Alex beats the game…but then it is back to real life.  Until that night when Alex is visited by the video game maker.  Calling himself Centauri, he invites Alex to join him on a short trip.  Alex does not realize this will change his life forever.

The video game was actually a simulator that was meant to test potential pilots in an intergalactic war.  Reluctant at first, Alex finds himself forced to put himself aside to help in something much larger than he.

The Last Starfighter is imaginative and fun, with a great cast of characters.  Alex (Played by Lance Guest) is a likable dreamer, which is important as such characters can also come off as painfully whiny.  Instead, you genuinely feel for him when his college goals seem crushed.  Catherine Mary Stewart (Night of the Comet) is Maggie, who is more down to earth, not as worried about escaping the potential future of their small town life.

Centauri is one of those big idea pitchmen who is certain Alex is just what the Star League needs.  He is brought to life by the great Robert Preston (Harold Hill in the 1962 version of the Music Man).  Dan O’Herilihy is Grig, a jovial and kind reptilian co-pilot for Alex in their Gunstar.

Probably the biggest knock against the film is that it was made in the infancy of digital effects.  Unlike Tron two years earlier, everything is not meant to look like a video game.  Now, mind you, it looks like a late 90’s video game…so it was advanced for its time…but the purely digital spaceships look very low tech.

The Last Starfighter is certainly not the first story about a dreamer getting their wishes, but it is very successful at making it a fun ride.  It is the humor and heart that allows it to overcome limitations such as severely outdated digital effects.  The Last Starfighter is a minor science fiction classic. 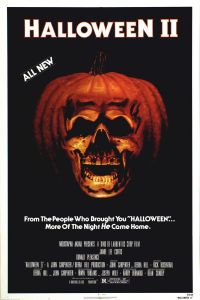 Halloween 2 is guilty of kicking off a lot of horror sequel trends. You remember that kid Randy from the Scream movies? The one who explained all the rules of the slasher genre? Halloween 2 pretty much nailed every one of the rules of a sequel that Randy talks about in Scream 2.

Halloween 2 does not suck. On the other hand, it is not quite as good as the first film. Carpenter and Hill are producers and helped with the script, but the film was directed by first time film director Rick Rosenthal (who has gone on to direct a lot of television, especially in the horror/fantasy genre such as Buffy the Vampire Slayer and Smallville) who returned to the last film before Rob Zombie’s reboot. So, as with many sequels, this was someone cutting their teeth.

Spoilers are cutting up next.  Ouch. Sorry about the pun.

The part of this film that works is we have our main cast returning and it continues on the same night as the original film.  This one picks up as Dr. Loomis believes he shot Michael dead, only, of course to look over the edge and see Michael is gone.

The story continues Michael’s unrelenting attack, though it becomes more refined.  People often forget,  it was Halloween 2 that introduced the idea that Michael and Laurie were siblings (It was also the second film that first used the song Mr. Sandman to creepy effect).  Nearly the entire second film takes place in a hospital, with the majority of film’s victims being hospital employees.

As the film starts, Laurie Strode is taken to the local hospital, which is pretty sparcely populated at the time, we see no patients (other than some newborns in the nursery at one point), only a skeletal staff of nurses and ambulance drivers.  Of the two drivers, we have the kind hearted Jimmy Lloyd (played by Last Starfighter Lance Guest) and the sex obsessed, crass Graham (played by Jeffrey Kramer).  Graham is constantly trying to get some alone time with his girlfriend, Nurse Bailey (Pamela Susan Shoop).  Jimmy on the other hand keeps trying to sneak in to talk to Laurie, though head nurse Mrs. Alves (Gloria Gifford) keeps interfering, insisting Jimmy let Laurie rest.

Dr. Loomis is still working with police to try and catch Michael, but that relationship becomes increasingly strained as the sheriff discovers that one of the dead teens is his own daughter.  It is when Marion Chambers (who we saw in the first film) comes to tell Loomis he must leave with her under state orders that they discover a truth that was hidden from even Loomis.  Michael had another sister, little Laurie Strode.  Loomis, being the determined guy he is, will not go down without a fight and demands to be taken to the hospital.

Of course, in the meantime, hospital staff have dropped like flies.  Laurie has been sedated, but she refuses to give up and stumbles through the hospital trying to escape the ever present Michael Myers.  If it sounds familiar, this is because many films have duplicated this cat and mouse since in the slasher and horror genre.  But Halloween 2 pulls it off well, it is one of the film’s strong points.

Loomis arrives at the hospital for a final showdown with Michael.  In one of the less plausible moments, Laurie manages to shoot both Michael’s eyes out with a gun…which only blinds him.   Holding a scalpel, he swings wildly as Laurie and Dr. Loomis turn on the various gas tanks in the room.  Loomis sends Laurie out of the room and then flicks a Bic lighter (okay, maybe it was some generic brand of lighter) blowing himself and Michael up.

This film ups the killings, using various implements found in the hospital (such as needles).  The kills are more gruesome and elaborate, the characters less dimensional (hardly a shock as there are more characters introduced).  It carries through pretty seamlessly from the first.  But it lacks something without Carpenter’s skilled eye for the use of shadows and light to obscure Michael.  So it has a different feel.

They do try and advance the story, rather than re-hash it (which is where we get the family connection exploited both well and poorly in later films).  It is notable that they killed Michael off believing that they were done with stories about Myers.  I mean, where else could they go?  The idea was that now they could make other movies with the Halloween title, but all new stories and characters.  And then they made Halloween 3.