La Muerta rules over the joyful Land of the Remembered, while Xibalba rules over the Land of the Forgotten. He tries to convince La Muerta to change sides, but she is not interested.  He proposes a wager. Observing the rivalry of two young boys (Manolo and Joaquin) over their friend Maria, each god chooses a boy as the one who will marry Maria.

La Muerta disguises herself as an old woman who asks if Manolo might give her a piece of bread.  Instead he generously offers a full loaf. Xibalba tries the same thing, but Joaquin is not so giving. Maria is sent off by her father, returning years later.  Sensing Maria is favoring Manolo, Xibalba tricks Manolo into giving up his life.

In the afterlife, Manolo discovers he has been duped and seeks the help of La Muerta.

The design of this film is remarkably charming.  The framing device is that a museum tour guide is telling the story, and all the characters look like wooden puppets.

The Land of the Dead is a wonderfully bright and colorful world. The characters are full of charm. La Muerta is a kind and gentle, yet fearless goddess.  Xibalba on the other hand is both scheming and yet friendly (he is voiced by Ron Perlman, whose performance is just a lot of fun).  And while the story frames Manolo as a kind and generous artist and Joaquin as a cheerful braggart? Joaquin is not a villain.  The story is pitting the two against each other, and it obviously favors Manolo as the man for Maria. But Joaquin is seen as simply misguided and in need of a lesson. The film has sympathy for him.  And then there is Maria.  She is not interested in belonging to anyone and regularly challenges her two friends. And there is Chuy the pig who makes a sound like a goat.

The music of the Book of Life blends American Pop music with latin flavors to great effect.  But the highlight are the two original tunes I Love You To Much and the Apology Song.

The Book of Life is a charming fairy tale of love, loss and rebirth. 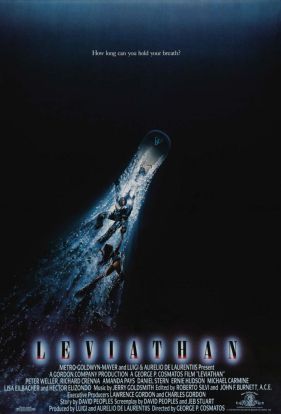 Also in 1989, we were treated to Leviathan. This was set at a deep sea mining facility.  Getting close to rotating out, they discover a sunken ship called the Leviathan.  In hopes of claiming riches, they brink back a safe.  But the safe just contains video tapes and a bottle of vodka.

The next morning, one of the crew is struck ill and dies.  But this is only the beginning, as the mysterious disease that killed the man seems to be actively altering his body.  Soon, a another crew member dies.  After the Doctor (Richard Crenna) confirms no other crew have symptoms, he and Crew Boss Beck (Peter Weller) decide to get rid of the  bodies.  But before they can, it fights back.  While trying to get rid of it, part of the body is sliced off and continues to grow while the crew is unaware.

The film is basically Alien underwater.  The crew uses flame throwers to move around and fight it through labyrinthine hallways.  They monster knocks off the various crew members until only a few remain.

This is a great cast.  Weller was fresh off Robocop, you had Ghostbuster’s Ernie Hudson, Amanda Pays , Richard Crenna and Daniel Stern in pivotal roles.  Then there are the effects.  It is obvious this was made on a tight budget and a tight time frame.    The Creature Effects were overseen by the Stan Winston Studio.  This team included Tom Woodruff Jr. and Alec Gillis who now run Amalgamated Dynamics, Inc.They manage to create a fearsome looking creature, in spite of not being given a specific design to work with.  The director wanted a kitchen sink approach which results in the monster being somewhat of a mess, but it still work quite well most of the time.

If the only two movies that came out in 1989 about undersea crews fighting a monster were Leviathan and Deepstar Six?  Leviathan is flat out the better film, in part due to it sticking so closely to the Alien Formula.  But 1989 saw one other film which broke new special effects ground and left these two films in the dust.

The director George P. Cosmatos followed this film up with Tombstone.  Really.