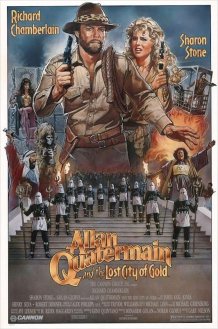 Pretty sure this sequel was greenlit before the previous film hit theaters, hoping to have a franchise.  For Chamberlain and Stone, this was the end of the road.

Everything that plagues King Solomon’s Mines?  Is still here.  There are no improvements.  Poor effects, awkward performances… the sexism, Jesse still does not really do a thing other than getting in trouble and get saved by Quartermain.

For racism, the natives do not fare any better this time around.  They are either primitives or mysterious primitives.Their search is for the titular Lost City of Gold…a city of myth inhabited by white Africans.    The white people they find are (of course) not primitive.  Oh, and they are ruled by Elvira, Mistress of the Dark.

This sequel is no improvement over the first film.  Granted, it is not really any worse.  Just equally terrible. 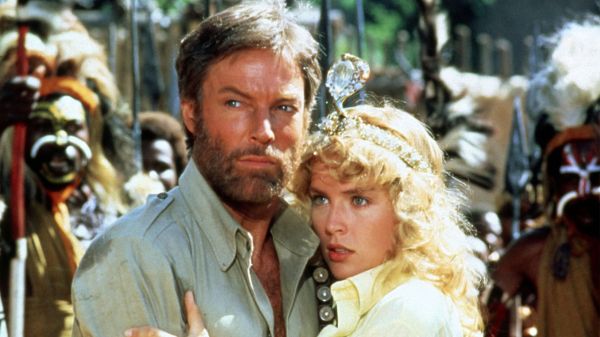 To cash in on Indiana Jones, Cannon Films produced this film based on the pulp works of H. Rider Haggard.  King Solomon’s Mines has been adapted more than once, both before and after this 1985 version (mainly TV and direct to video).

Allen Quartermain is an adventurer and fortune hunter hired by Jesse Huston to find her missing father in the African Jungle.  She believes he disappeared during an expedition to locate King Solomon’s Mines.

They brave all sorts of obstacles to reach the mines, including Germans and African tribes.

The film is definitely going for the feel of Indiana Jones, especially Raiders of the Lost Ark.  The film even cast John Rhys-Davies (Sallah in Raiders) as one of the villains.  The end result though?  Not very good.  It misses the mark in its performances, it’s action scenes and general tone.  The effects are cheap imitations of what we get from the ILM produced adventures.

What really hurts the film above all though?  It’s extremely dated sexism and racism.  At no point does it appear to have occurred to the film makers that Jesse might actually be interesting if she…well, did stuff.  Jesse exists solely to get in trouble, be saved and scream a lot.  She never shows the strength or smarts to be part of the resolution.  This was four years after audiences met the fiercely independent Marion Ravenwood.  Even Willie Scott had more presence.  Adding that Sharon Stone just lacks any charisma in the role, Jesse is forgettable and is just a pretty girl for Chamberlain’s Allen Quartermain to win.

And the racist choices.  O.M.G.  Rhys-Davies has clearly been painted a shade of brown.  It is distracting and embarrassing to watch.  The African Tribes are the worst of primitive stereotypes.

The end result is a film that just cannot compete against other pulp based fare, and lacks any charm on its own.