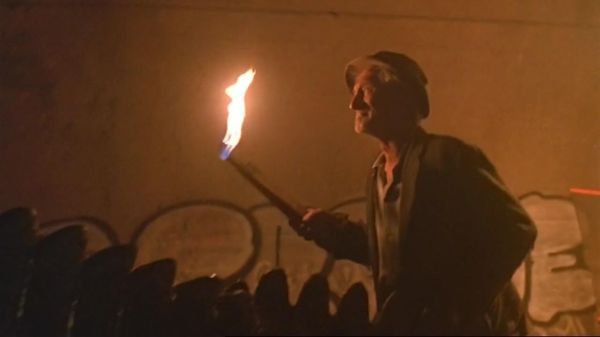 Over ten years after the original Alligator came the sequel. Now, the first film was about an alligator that was flushed into the sewers, fed on dogs full of growth hormones and was mutated into a giant alligator. It was defeated by a cop and his love interest zoologist.

Meanwhile, the sequel follows a police Detective David who is investigating disappearances that seem tied to a nearby lake. With help from his scientist wife Christine, he discovers there is a giant mutant alligator living in the lake. An unscrupulous land owner is trying to force locals out of their homes to build condos or something. He is a shady dude. So, like this is a totally different movie with a new plot. Really.

So, yeah, this was a direct to video attempt to cash in on the name recognition of the original and even reused footage from the film (shots of the alligator swimming and eye closeups). It pretty much follows the same story as the first, but there are small tweaks I genuinely like. David and Christine have a pretty nice relationship. Their marriage is not in jeopardy, and they seem to really like each other. Richard Lynch has a fun role as the mercenary badass initially hired by the bad guy to dispatch the gator. I like David, he is portrayed as “One of the Good Ones”, a cop who has a sincere love and respect for the community he serves. This makes him quite likable.

The effects are okay, but largely hokey. I am not sure why this is the mutation…this gator seems pretty much the same as the previous gator…which also was a mutation. This film is pretty much on par with the original, more of a remake than a sequel. It is kind of fun, though not any kind of classic.

After some uh, detours, Craven returned to the horror scene. His return was a violent fight as a family finds their RV Camper breaking down in the middle of the desert. But the family does not realize that they are not alone. Somewhere in the seemingly barren hills around them there are a threat greater than the sun or scorpions.

Inspired by the Scottish legend of Sawney Beane and his family of robber cannibals. Adding to this was Craven’s appreciation for Tobe Hooper’s Texas Chainsaw Massacre. And the results? Unlike Last House on the Left, I find the Hills Have Eyes to be a film far easier to rivisit.

A focus on class warfare, or more civilized versus feral, the story follows the Carters. The family is on a road trip. They decide to take a shortcut, in spite of warnings against it from a local gas station owner. When their RV seems to blow a tire, the Carter assume nothing to be wrong. But as the hours pass, they start to become aware that they may not be alone. As things escalate, the Carters find themselves in a place of fear.

Not understanding what or who they are dealing with, the struggle becomes one for survival…which family walks away? Are the Carters bound to be a statistic of people who disappeared in the desert?

The central conflict of the Jupiter clan and the Carter family is an intense one. The Carters have clearly never had to fight tooth and claw, and so they have a steep learning curve.

This is a stronger narrative and Craven keeps a strong and oppressive tone through out the film. This is, in my opinion, the real start to showing what Craven was capable of and worth a watch. 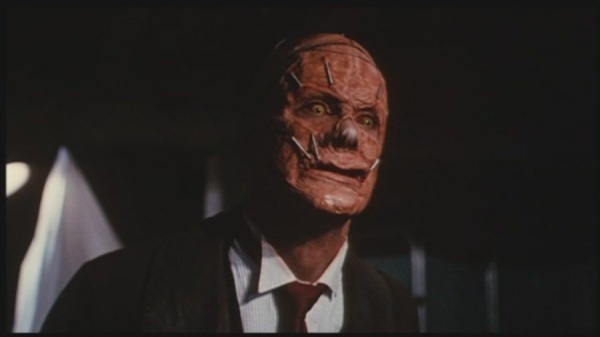 Popcorn is one of those horror films that fell into obscurity.  Starring a cast of genre vets, it features a fun premise and inventive sequences.

Maggie (Jill Schoelen, the Stepfather) lives with her aunt Suzanne (Dee Wallace Stone, the Howling).  Maggie is an aspiring filmmaker haunted by strange dreams of a young girl being chased by a maniacal man with a blade.

She and her film club plan to do a fundraiser by showing old B-Movies in the vein of William Castle.  They include gimmicks like props and shocking the audience.

But once the movies start, people begin to die.  We discover there is someone running around the theater wearing masks of his victims.  Not like Leatherface, but latex.

This is all tied to a film they had opted to not show…it was made by a man who killed his family on stage at the end of the movie.  There was a fire and all but one person and a child survived…well, and possibly the filmmaker.  The film has a good twist and avoid totally telegraphing it.

The cast is terrific, and the scenarios they find themselves in are entertaining.  The late Tom Villard (Who kind of looks like a slightly goofier Tom Hanks) is especially likeable. The film appears to have been made on a budget, but the practical effects are pretty good.  The villain’s makeup looks great most of the time, until a bit towards the end when it seems like the prosthetics were coming undone as the actor is speaking. Sadly, the film is hard to find.  There has yet to be a Blu-Ray release, and the DVD release years ago was sub-par.  Apparently Synapse had plans to release a Blu-Ray, but I cannot locate a story confirming it was ever released, and all the stories announcing it are from 2014.  If you can track it down, Popcorn is one of the more enjoyable slasher films from the early 90’s.