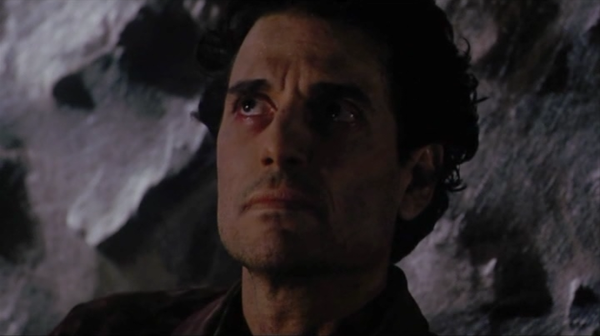 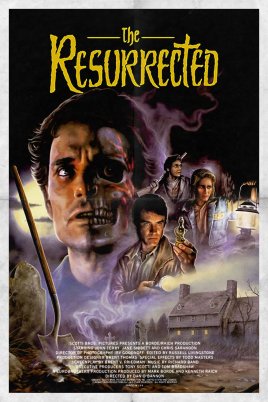 The wife of scientist Charles Dexter Ward has hired the private investigator John March ti find out what secret her husband has been hiding.  She knows he has been conducting mysterious experiments at an ancient home he has recently inherited.

What they discover is that his is exploring paths mankind should not dare…and the results are potentially blasphemous.

Lovecraft can be very tough to adapt, and the screenwriter Brent Friedman’s decision to make it a Detective Story allows the basic structure to stay in place, since the original story is a doctor investigating the disappearance of Ward.

The performances are good in the film, with the small cast being made up of familiar supporting players and headed up by Fright Night’s Chris Sarandon.

The visual effects are quite good, with some very good creature designs.

This was meant to be a theatrical release, but the studio that produced it went bankrupt, which led to a home video release. In addition, apparently, the studio made rather large edits against the wishes of O’Bannon.  But the released version is a good little supernatural detective yarn worth a watch. 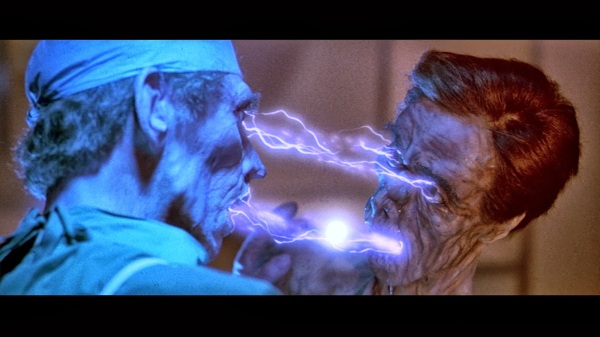 When I planned this post, Tobe was still with us. In October, I will be exploring some other Hooper films.  But my thoughts go out to Hooper’s friends and family. 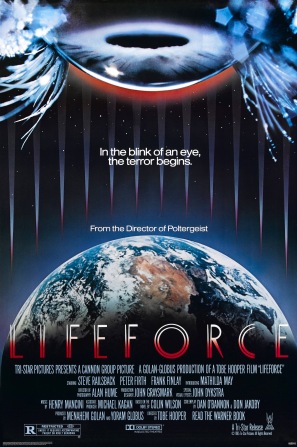 Set in 1985, the international space shuttle the Churchill is observing Halley’s Comet.  They discover an object hidden in the tail of the comet, only to discover it is a giant spaceship.  The craft is full of corpses of strange humanoid bat creatures…and then there is the weird part.  Three beautiful humans encased in crystal coffins.  The Churchill goes silent, and is only discovered after it appears to be adrift.  It is found with only one remaining crew member (Col Tom Carlsen) and the beautiful young woman.

Col. Colin Caine is trying to determine what has happened, but a new threat arises when the beautiful girl awakes and we discover she is a life draining energy vampire.  Seducing a young guard, she dramatically draws his life energy out, leaving a desiccated corpse.  It all created a domino effect as it turns out those she drains are not dead, but now lesser vampires.  They can return to life briefly, but without regular energy infusions, they die permanently.  Caine and Carlsen start trying to track down the Space Girl (this is actually how the character is credited) who is moving through London psychically, while her body is hidden away.

The visual effects in Lifeforce are very strong.  The corpse monsters (and there transformations) are especially cool sequences.  There is a sequence where the Space Girl reaches out to the leads building a blood body that is effective (though the two bodies are clearly dummies).

The cast is good, with Railsback’s Carlsen being a seemingly dubious character who seems more obsessed with the Space Girl rather than stop her.  The film aims to be pretty epic, but can veer into some real campy territory.  Most notably, although the beautiful young actress Mathilda May only appears as the Space Girl for about ten minute or less?  She is naked for about twelve of those minutes.  Sure, by Game of Thrones standards, that seems quaint…but it was a pretty big deal at the time.

There is a goofy charm to the film, and most of the strengths are the presence of British Thespians such as Frank Finlay and Patrick Stewart (who shares an on screen kiss with Railsback).  Hooper has certainly made weirder films (*cough* the Mangler*cough*) 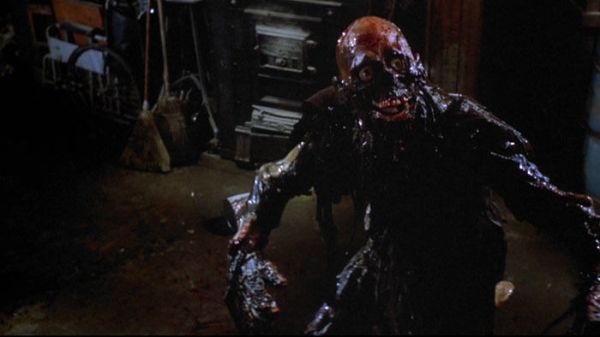 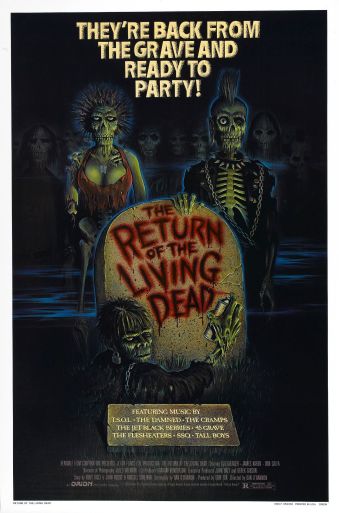 In 1986, Alien Screenwriter Dan O’Bannon made a deal to direct (he had directed a short film seventeen years earlier) a film.  He was to make an unofficial sequel of sorts to Night of the Living Dead.

An effects heavy zombie film, the big twist of the Return of the Living Dead is it is a comedy.  A gory one, but a comedy none the less.  We are quickly introduced to Frank and Freddy, employees of a medical supply company.  After Burt (the boss) leaves for the weekend, Frank starts to show Freddy around, skeletons, half dogs and cadavers and the like.  He also tells Freddy that they have some canisters with real zombies (and proceeds to proclaim the Night of the Living Dead was a real thing, just altered for the film).  They look at the canisters and accidentally release an ominous gas.  When they wake up, they find all the dead things seeming to be alive.  This leads to some hilarity as they call Burt in and the three try and fix the problem.

Meanwhile, Freddy’s girlfriend Tina is hanging out with her friends (a bunch of punks) in a graveyard waiting for Freddy to get done with work.  This includes a bizarre moment Trash (Scream Queen Linnea Quigley), obsessed with death starts expressing a fantasy of being eaten alive (foreshadowing, folks)…she then strips and dances upon a tombstone.  Burt, Frank and Freddy go across the street with a cut up cadaver and check in with mortician Ernie.  They ask to use the crematorium to dispose of rabid weasels.  But as the body burns, it creates more ominous smoke which causes a storm and in turn the rain soaks the ground, re-animating the graveyard.

What follows is the characters trying to survive the hoards of zombies.  Everyone gets trapped in the mortuary or the medical supply warehouse.  The film finds a lot of humor in it’s gruesome subject.  Thom Mathews (Freddy) and James Karen (Frank) have a great rapport and are very entertaining as the two discover they are slowly turning into zombies.  Really, the entire cast is entertaining.  Along with Mathews and Karen, Clu Gulager (Burt) and Don Calfa (Ernie…get it?) are very funny.  It helps that everyone seems to be in on the joke, leading to fun performances.

The effects are terrific, still holding up for the most part.  There is one especially well done zombie effect with a “half” zombie.  Another memorable character is the Tar Man…a slimy decomposing zombie.  The actor in the outfit moves with a creepy fluidity.  The film actually pays little attention to traditional film zombie lore.  They cannot be killed by damaging the brain, even cutting them up, the zombie parts all act independently.  The zombies can also talk.  This is one of the first incidents of zombies being focused on eating brains (In Romero’s films, they just want to eat flesh).  And they constantly announce “Brains!”  But they can form sentences.  One zombie even explains why they  desire to eat brains.

Oh, there are some question to ask…for example, why, after being eaten alive, is Zombie Linnea Quigley have not a single bite…instead she has perfect porcelain skin.  How can the zombies with no lips (some zombies do, some don’t) say stuff like “Brains” and “More Brains”?

Shout!Factory released a Blu-Ray special edition through their Scream!Factory imprint.  It is loaded with special features.  There are four audio commentaries (two are brand new), zombie subtitles (which is an amusing feature for a short time, featuring subtitles like “Arggh” whenever zombies speak), an extensive documentary “More Brains: Return to the Living Dead”, a final interview with the late O’Bannon and many more features.

The picture (from a 2K scan) is clean and looks good.  The two disc set is worthy of any fan’s collection. 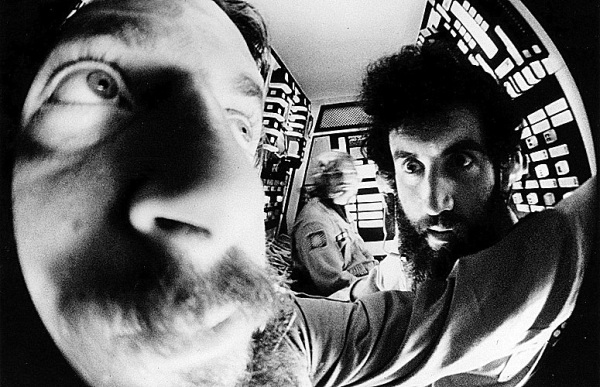 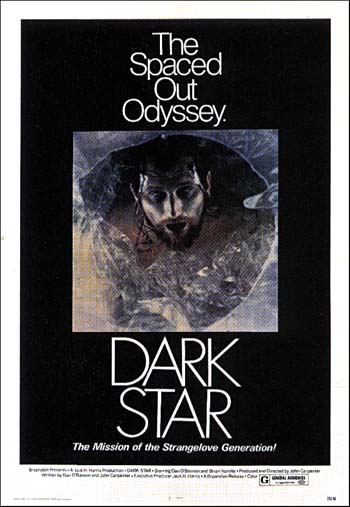 John Carpenter’s feature length debut was an odd comedy about four astronauts doing space work or something.  They blow up planets as prep for colonization of other planets in that solar system.  Aside from Carpenter, probably the most notable thing about Dark Star is that it was written by Dan O’Bannon, who went on to write Alien, as well as Return of the Living Dead and the Arnold version of Total Recall.  O’Bannon also plays a character named Pinback in the film.

It is a very low budget film, even by the standards of Carpenter.  He has always been a guy who can stretch a buck…but this film reeeeaaaally Stretches the dollar.  The film feels like a student film, and the cast outside of Carpenter and O’Bannon have slight to no film resumes beyond Dark Star.  The alien in the film looks like a beach ball.  Because it is.

You can see hints of O’Bannon’s future work, such as having the female voiced computer called Mother or trying to stop a self destruct countdown. But to be honest, it is hard to see the talent at work.  I mean, I know what both became.  Carpenter has directed some of my favorites.  The music, by Carpenter does not hint at all of his future classic soundtracks, such as Halloween or Escape From New York. Instead there is a bizarre country song that plays over the credits.

This is most definitely not the place to start with Carpenter, and is more of an odd footnote.