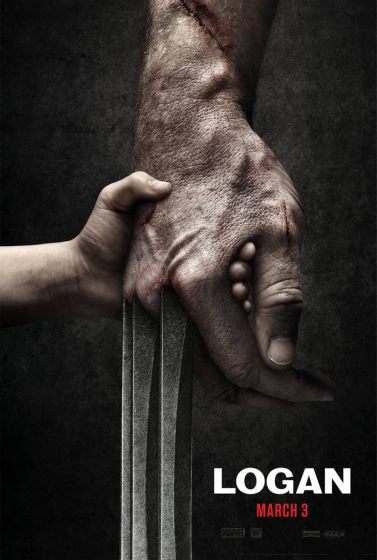 First things first.  You might figure this is a super-hero movie and safe for kids.  Logan is a hard ‘R’ and earns it in the first five minutes.

It has been known for quite some time that this was Jackman’s swan song.  Seventeen years is a long time to play the same character.  Just a few days ago Stewart said this was his final time playing Professor X.  And Logan is, without a doubt, a way to go out on top.

Taking the approach of Unforgiven, Logan is set in the not to distant future of 2029.  We meet a Wolverine who is not quite the best at what he does anymore.  He is sickly, he claws don’t work quite as well and his healing abilities are significantly slower.  He drinks, stumbles and is quietly hiding an even more troubled Charles Xavier.  There are hints and references to a massive tragedy that Charles is guilty of causing.  Logan and another mutant  Caliban (who is able to sense and track other mutants) keep Charles drugged because he has seizures that could destroy a city.

Although it is believed mutant kind is essentially wiped out, a young girl named Laura falls into their lap, forcing them to run from a nefarious organization that wants to get her into their possession.

Logan is a dark film, one that feels from the start that it has only one end for our leads.  It is a bloody struggle to get Laura to freedom.  However, it has it’s light moments.  These are primarily between Jackman and Stewart, as well as with Laura.  She is a feral child in some respects and has powers very much like Wolverine’s.

This is most certainly one of the best films in the X-Men franchise.  The story is compelling and the performances engaging.  The quality of the Wolverine films is a rare example of going from bad to great.  Logan is worth a watch.