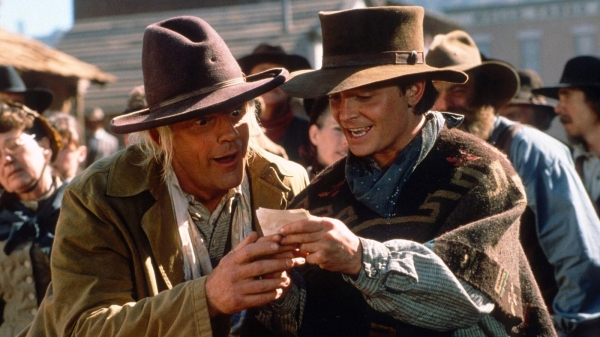 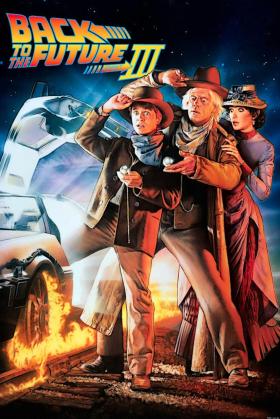 “The Future is whatever you make it, so make it a good one!” These are the words of wisdom Doc Brown chooses to give Marty after three films bouncing around time. Spoilers occur throughout…

Made back to back with Part Two, the third film takes Doc and Marty to a time most appealing to Doc Brown.  Why the old West is so appealing to Brown, a scientist, always seems weird to me. But anyways, Marty goes to 1955 Doc Brown for help.  Future Doc Brown hid the Delorean away, so Marty and 1955 Doc dig it out so they can fix it and Marty can return to 1985.  However, in spite of Doc’s comfort with remaining in the old west, Marty realizes there is a danger when they discover a tombstone for Brown from the 1800s.  And so he goes back to get Doc.

In the old West, Marty finds himself meeting the relatives of both his family and Biff Tannen.  Biff apparently comes from a long line of bullies. The film brings back the gag of Marty giving a false name, this time around he calls himself Clint Eastwood (which is met by laughter from locals for being a non-masculine name). Marty and Doc must figure out how to get back to 1985 before Doc is killed.

Things are complicated by the arrival of Clara, a schoolteacher.  Doc saves her from falling off a horse.  As Doc falls for her, they realize that she should have died, and Marty and Doc have altered history.

Back to the Future Part III avoids the complications of the previous film, keeping everything in a single time for most of the film.  It repeats the motifs of the original film, and it takes three films for Marty to learn not to be set of by being called chicken. But while it is less creative than Part II, it is more tonally consistant and therefore more satisfying for the audience, I suspect.

I do find the “moral” imparted by Doc odd.  We have spent three movies with Doc declaring how dangerous time travel is and how they need to stop jumping through time…only for Doc to decide to run around the time continuum with his family.

But still, this is a pretty enjoyable close to the series, and really, feels like a decent high note to end on. 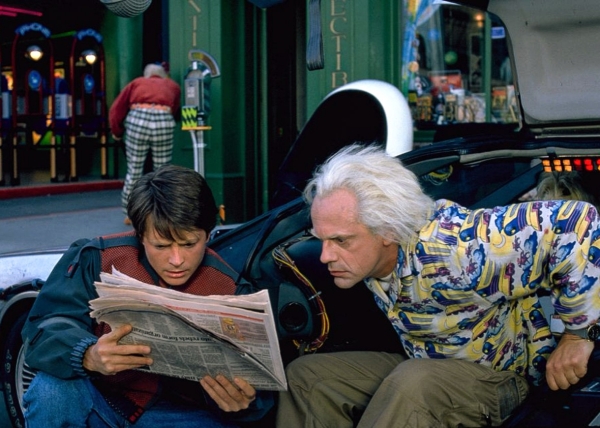 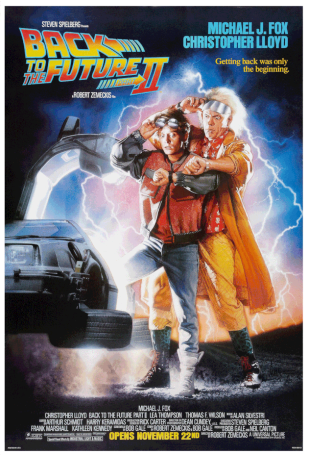 Spoilers occur throughout…Back to the Future had one of those endings that worked both as a setup for future films, as well as just a cute way to end a time travel movie.  Marty’s life looks awesome and then Doc Brown shows up saying they need to fix the future. I suspect that the reality is, it was just meant to be a cute little throw away ending.  But then, Back to the Future was a big hit…and both the film makers and audiences wanted to see more. And so they set forward with plans for two sequels.

Back to the future begins right where the first film left off, Doc Brown urgently telling Marty they have to go into the future to do something about Marty’s kid. They bring along Jennifer for the trip to the future, but she becomes so excited by the notion of being able to see her future, the Doc opts to knock her out, telling Marty she will just think it is a dream.  Doc tells Marty to go to a local hang out, meet Griff (grandson of Biff) and simply tell him “no”.  It turns out that if Marty Jr. goes along with Griff’s peer pressure, he will end up in jail.

But after fixing that potential future, other things go awry.  The police find Jennifer and bring her to her future home. Meanwhile, Marty gets the idea to buy a sports almanac so he can go back to the present and make bets based on future knowledge.  Doc puts the idea to bed, but someone overheard the idea…and while Doc and Marty go to get Jennifer? Old Man Biff seeks to reverse his fortune.

They return to the present and leave the unconscious Jennifer on her porch. Marty slips in through his bedroom window, only to discover a whole new family is living in the house.  After being chased off by an angry father, Marty comes across a newspaper.  Certain they came back to the wrong time, Marty discovers that, indeed, they returned to 1985…but everything is off.

Marty is knocked out, and when he awakens (in a scene mimicking the sequence from the first film where he awakens to find his teen mother watching over him) he is startled by a mother who looks very different from before.  He is horrified to discover that Biff is his step-father…and Biff is the richest man in America. Biff tries to kill Marty based on a warning from the man who gave him the sports almanac.  Doc Brown intervenes and explains to Marty that an alternate timeline has been created.

To fix the timeline, they must go back to 1955 and steal the almanac from young Biff.  Then, hijinks ensue.  Marty has to get the almanac from Biff, while avoiding Biff’s thugs, yet also save his other self from those thugs.  It is a crazy last act, filled with alternative views of sequences from the original film.

The most memorable part of the film for audiences was the future of 2015, where Marty rides a hover board, is wearing self drying clothes and everything is super technologically advanced. And apparently Gale and Zemeckis believed the height of future technology would be TV screen communications, swiping credits cards and…fax machines all over the house, built into walls.

It is a fun sequence though, for my money alternate 1985 is an interesting idea.  Biff’s rich and famous routine is absurdly entertaining in it’s obvious allusions to the Donald Trump of the 80’s.  And the notion of 80’s nostalgia is certainly not inaccurate.

The film ends on a cliff hanger, with it seeming that they solved the problem of the Dark 1985 timeline, but the Delorean is hit by lightning, causing it to appear as if Doc Brown was incinerated…but it is all a set up for the third chapter.  A Western Union guy arrives with a letter addressed to Marty from 70 years earlier.

They introduce a a variation on the photo gimmick from the first film, instead using newspaper clippings. As they make changes, the paper headlines and photos change.

This is a flawed film, mainly because halfway through it just starts to seem endlessly complicated. But, in some ways, I really like it for daring to mess around with it’s formula. 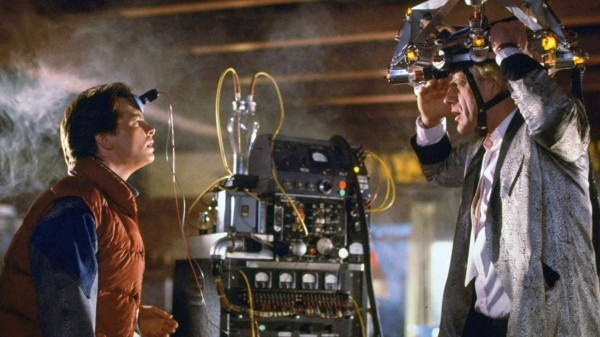 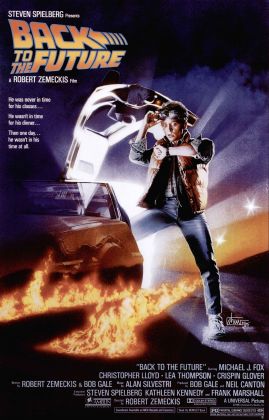 Spoilers occur throughout…Marty McFly has big dreams but lacks any of the confidence to reach for them.  His high school principal is convinced every generation of the McFly family are losers. And it is not hard to see why Marty may struggle with that.  His parents are meek.  His father is pushed around by his boss Biff. Biff has George McFly writing up his reports as well as supplying him with his car. His mother is uncomfortable with the notion of a girl calling a boy. His sister and brother are unemployed layabouts.  And his uncle pretty much lives in prison, failing to get parole at the beginning of the film.

Marty’s only bright spot is his girlfriend Jennifer.  She is confident Marty should be successful, especially as a musician.  One evening, Marty is asked by his friend, eclectic inventor Doc Brown, to help him with a top secret project.  The project turns out to be a Delorean car that Doc converted to… A TIME MACHINE. After an attack from rogue Libyans (it makes sense, trust me) forces Marty to jump into the Delorean and race off, triggering the time travel.  Marty finds himself in 1955. Marty runs into his father, who turns out to be just as as weak willed as his grown up self.

But it is when he saves his father from being hit by a car that everything goes wrong. He discovers the act prevents his father and mother from starting their relationship, instead, young Loraine falls for Marty. Marty Tracks down Doc Brown for help and they set out to fix Marty’s parental relationship (discovering that he and his siblings will be erased from the timeline if his parents fail to fall in love).

As bizarre and outlandish as the plot may seem (and even creepy, what with the subplot that Marty’s mom has a crush on him), everything fits together nicely. The film establishes all the town’s important monuments in about two minutes.  Each character is quickly defined in brief dialog.  And the film presents the science of time travel in ways that seem complex, but easy to suspend disbelief for.  Zemeckis and writer Bob Gale also have a simple gimmick for communicating to the audience the severity of the situation.  Marty has a photograph of he and his siblings, each of whom fade from the photograph through the course of the movie.

Back to the Future was Michael J. Foxes first big starring feature film role.  A role that almost never happened, the film began shooting with Eric Stoltz, but after awhile, it was felt he was just not right in the role.  Up until this point Fox had been a rising television star.  But Back to the Future pushed him into the next level.

Crispin Glover brings a likable and sweet nerdiness to the role of George McFly. This is important, both for George and Marty.  While Marty is a “cooler” kid, a lot of his insecurities are mirrored in his father.  When George makes his third act turnaround, Glover does so with a great performance.  Lea Thompson is sweet, with a hint of rebellion, as Marty’s mom.  A lot of the fun for her character is the juxtaposition of the woman she is in the future and the teen she was.

As Doc Brown, Christopher Lloyd brings his signature manic style, making for an entertaining performance Thomas F. Wilson will probably be forever tied to Biff Tannen, but he is extremely memorable in the role.

While the old age makeup for all the actors certainly looks like “Old People” makeup, it is not so distracting as to damage the enjoyment of the film. A lot of the effects still hold up for the film.

The tone of the film is light, with plenty of humor. And the jokes, for the most part, have withstood the test of time. There is one gag that has not held up so well, because, looking back, it is an image issue.  The gag on it’s face is not remotely malicious, and the filmmakers probably never once had it occur to them that they were basically attributing a form of music created by black musicians to a white kid from the future.

Decades later, Back to the Future is every bit as entertaining as it was in 1985.